There are several types of glaucoma. The two main types are open-angle and angle-closure. These are marked by an increase of intraocular pressure (IOP), or pressure inside the eye. 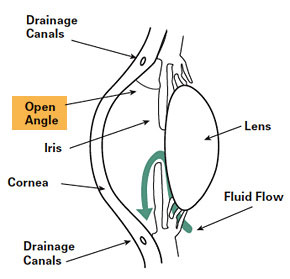 Open-angle glaucoma, the most common form of glaucoma, accounting for at least 90% of all glaucoma cases:

“Open-angle” means that the angle where the iris meets the cornea is as wide and open as it should be. Open-angle glaucoma is also called primary or chronic glaucoma. 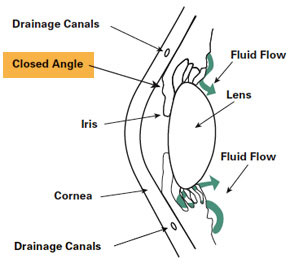 It is also called acute glaucoma or narrow-angle glaucoma. Unlike open-angle glaucoma, angle-closure glaucoma is a result of the angle between the iris and cornea closing.

This type of glaucoma occurs in babies when there is incorrect or incomplete development of the eye's drainage canals during the prenatal period. This is a rare condition that may be inherited. When uncomplicated, microsurgery can often correct the structural defects. Other cases are treated with medication and surgery.

Other Types of Glaucoma

Variants of open-angle and angle-closure glaucoma include:

With inflammatory glaucoma the inflammation can either raise or lower the IOP (intraocular pressure). Inflammation causes white cells to form in the liquid in the front of the eye. The cells get trapped in the trabecular meshwork (the “drain”), blocking it. The fluid also becomes thicker and less likely to pass through the drain, and the trabecular beams that make up the drain swell, making the pores between them smaller. Inflammation can also release prostaglandins that increase the flow of fluid out of the eye between the muscle bundles of the eye.

Iridocorneal Endothelial syndrome or ICE syndrome is a grouping of three closely linked conditions: iris nevus (or Cogan-Reese) syndrome; Chandler’s syndrome; and essential (progressive) iris atrophy, which together also spell the acronym ICE. ICE syndrome is caused by the diseased lining of the cornea, which grows over the drain in the eye, blocking it, and over the iris, causing stretching and a lack of blood supply.